KCK June 07, 2021
So as far as "Menu Mondays" here goes, we have two firsts: a breakfast menu and a menu for a train dining car.

Union Depot was opened in Kansas City, Missouri, on 7 April 1878, designed by architect Asa Beebe Cross to accommodate a growing number of railroads needed to ship products and transport people. It was an impressive building, the largest west of New York. Though at first its size and ornate style seemed a bit "extra" to many, its need was proven within just a couple of years as population and product shipping demands increased. 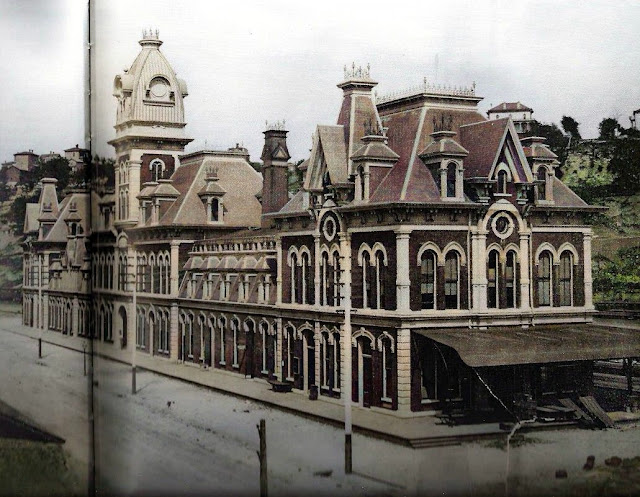 It was, unfortunately, located in an part of Kansas City called West Bottoms, a seedy area filled with saloons, tattoo parlors (yes, they had those back then), and houses of ill repute; not a place where respectable people wanted to be. The depot itself was spacious and very comfortable, with a restaurant and offices.

Aside from being in an undesirable part of town, West Bottoms was also prone to flooding, and in 1903, a flood put the Depot several feet under water. By the 1910s, the three-decade-old building was considered outdated anyway, and the larger, more modern Union Station was built at 30 W. Pershing Road in 1914, where it still stands today as a train station and a place of culture, learning, and great food.

So if you were traveling overnight via train out of Union Depot on November 9, 1899, and woke to the morning sun in your face, what would you want for breakfast given the choices below?

Much Victorian breakfast food is quite a bit different than what modern people expect... we don't typically think of steak and fish as something we'd want with our morning cuppa.

I think I would go with something more familiar to my 2021 palate: poached eggs, bacon, baked potatoes, fruit, and coffee (not actually sure what is meant by "baked potatoes", but I'm not thinking that they were whole baked potatoes like we think of today -- probably more like home fries).

I love the bottom in teal green font: "You are particularly requested to report any inattention to Fred. Harvey, Union Depot, Kansas City Mo."  I did some digging, and Fred Harvey was the owner of a chain of restaurants that served several railways. Why there is a period between "Fred" and "Harvey", I'm not sure. Is this meant to instruct people to take any complaints about service to Fred Harvey personally? More likely it refers to the restaurant actually at Union Depot.

I really would like to visit Union Station if I'm ever in Kansas City.