I absolutely love the New York City Public Library's historical menu collection, which is where I have so far found all of the menus I have featured here on Mondays; they just ask that if you reproduce their menus that you credit and link back to them, which I would happily do even if they didn't request it -- this is a wonderful site containing menus dating all the way back from the 1850s to the early 2000s. Obviously, we focus here on those of the 1800s and early 1900s.

This week we're visiting the 1870s (curiously, the only menu NYPL has in their collection from that decade), and my mother's family's old stomping grounds of New Hampshire. You may remember that we featured The Profile House in a previous entry.

Kearsarge House was originally Kearsarge Tavern, owned by Samuel W. Thompson since 1861. But with the arrival of the Eastern Railroad to North Conway, Thompson saw more visitors -- and more opportunity. He transformed the tavern into a grand 300-guest hotel that put North Conway on the map and made it one of the premier summer resorts of the White Mountains in the late 19th century.

Sadly, a fire destroyed the hotel in October of 1917. But a clock that graced its premises was rescued and now resides at the nearby Kearsarge Inn.

So here is the dinner menu for Kearsarge House on August 9, 1873: 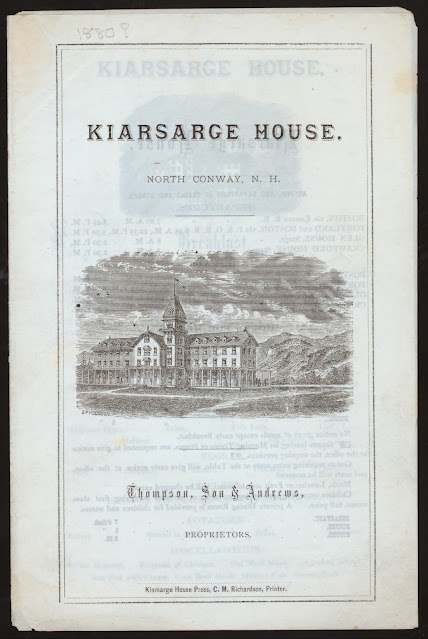 Honestly, much of the food on this and most other Victorian menus I've seen sounds very appealing to us moderns. Boiled anything, other than eggs, just strikes us as gross -- doubly so for neat's tongue. Skip.

My eye went to the "Roast" section: I'll have the lamb, medium rare please -- even with mint sauce, though I prefer it with garlic and rosemary (this is the 1870s, after all). Mashed potatoes on the side. I'd finish off with lemon ice cream and coffee.

There are a number of items under Pastry and Dessert on the menu that have me curious -- Webster Pudding? White Mountain Cake? Floating Islands? My idea was to do a follow-up post to explore these interesting-sounding desserts, but when I started, I came across what looks like a terrific blog that already did the work for me, so I will link to it here instead. It's Documentary & Oral History Studio, Loyola University New Orleans, and the entry is "Railroads, Hotels, and Pudding: Oh my!" They haven't posted anything since December of 2020, so hopefully they'll be back with new stuff soon!.