One day when my mother Shirley Howes was in middle school, her teacher introduced a new student: "Class, this is Joan Howes." My mom was instantly curious and approached the new girl at lunch -- and it turns out that Joan was her first cousin, the daughter of her father's twin brother. Mom said she was a nice girl, but they didn't stay in touch. This was probably because my mother's parents had divorced when she was about ten (unusual for the 1940s), and mom was pretty much estranged from her father and his side of the family thereafter.

So last night I was looking at my DNA matches to me on Ancestry. Ancestry now gives users the ability to group our matches and identify specific relationships -- so I was going through my close matches, identifying what side of my family they're related on and picking one of the suggested specific relationships if I knew them. Usually Ancestry was spot on with their list of possible relationships, ranging from most likely ones to least likely.

Then I got to "Jenny", daughter of my mother's aforementioned cousin Joan (Joan is now deceased, but her daughter is still living, as far as I know, so I'm using an alias to protect her privacy). So Jenny is a second cousin to me -- our mothers were first cousins, our grandfathers were siblings, and we share a common set of great-grandparents. But she was showing to be more closely related than a second cousin (about 8% of our DNA, when second cousins should share about 3%). The suggested relationships were first cousin once removed and other relationships equivalent to this amount of shared DNA. 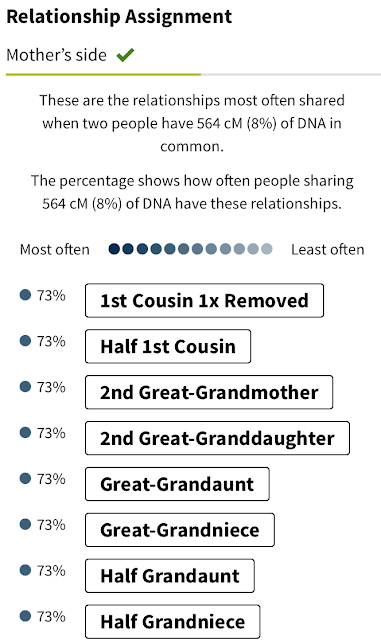 This confused me until I remembered that our grandfathers were twins.

So here I need to shift gears and explain the two main types of twins; there are some weird things that can happen with twinning, but we're going to stick to the two common types:

Dizygotic ("fraternal") twins happen when two sperm fertilize two eggs and they both happen to implant; they can either be the same sex or different sexes. Basically, dizygotic twins are just siblings that happen to be conceived at the same time and share a womb. Genetically, they share no more DNA than non-twin siblings (about 50%).

Monozygotic ("identical") twins happen when one sperm fertilizes one egg, and the resulting zygote splits, forming two people. Monozygotic twins are always the same sex. They share nearly 100% of their DNA (it used to be thought that their DNA was absolutely identical, but it's recently been found that this isn't the case; there are slight genetic differences between even monozygotic twins).

I knew that Mom's father Henry and his brother Horace were twins, but never knew what kind, and even Mom didn't know when I asked her. Identical twins don't always look identical, especially as adults, and fraternal same-sex twins can look almost identical. English 1960s gangsters Reggie and Ronnie Kray were examples of identical twins who looked pretty different by the time they were in their 30s, and many people don't know that Mary Kate and Ashley Olsen are actually fraternal twins, despite how "identical" they look.

So getting back to my DNA match with Jenny, I realized that our grandfathers must have been identical twins; this would account for why our amount of shared DNA and Ancestry's relationship suggestions were a little off. Henry and Horace would have shared almost 100% of their DNA, so my mother and her cousin Joan would have shared closer to 25% of their DNA, instead of the usual 12% that first cousins normally would.

So DNA matching has answered a question that I've always been curious about and which, until recently, would have been impossible to know.

I'd like to do another post on cousin relationships, how to calculate them, and the interesting things that can happen with them. If you'd be interested, please leave a comment below and let me know.