KCK August 09, 2020
Once again, I came across someone saying that people back in previous centuries “didn't live past 40." Supposedly a history teacher, of all thing, too -- no wonder our kids don't know anything. 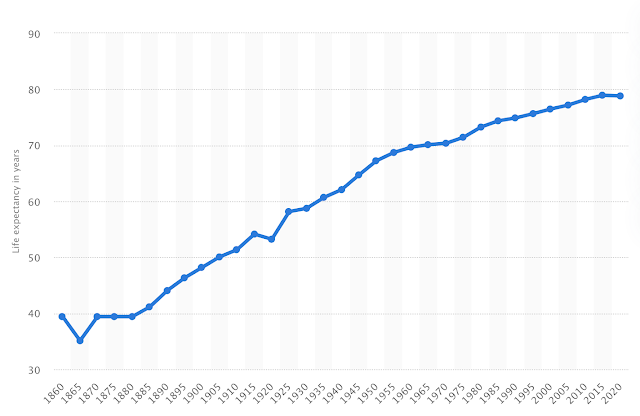 This woman's misunderstanding of average life expectancy, however, is a common one: that a people in a particular time/place having an average life expectancy of X means that most didn't survive past X.
But no. “Average life expectancy" is an average - that is, a column of numbers added up and divided by the number of numbers added. This is also called the mean. It's not the median (number in the middle of an ascending column of numbers) or the mode (most frequently occurring number in a list).
Average life expectancy for most was pretty low throughout most of modern history; from 1860 to 1880, the ALE in the U.S. was 39, and rose steadily from the late 19th century to now. Today, it's 78, double what it was in 1880. Now, from my having done genealogy for the past fifteen years, I know that a lot of people back in previous eras lived to ripe old ages -- into their 70s, 80s, and even 90s... so why was ALE so low?
The answer is largely infant/child mortality; many babies back then simply didn't live to adulthood, due to diseases and generally more dangerous conditions in and around the home. The grim reality was that a couple in late Victorian times who had five children could expect to bury at least one of them. So when you throw numbers like 0, 2, and 5 in with 75, 78, and 82, the average is going to be considerably lowered. As infant/child mortality has dramatically decreased gradually, our ACE has increased.
Consider a class of ten students taking a test. Let's say five of them score 100, and the other five score 50. The class average would be 70 (700 divided by 10). It would be wrong to conclude from this that most students scored C's. The reality is, rather, that half the students aced the test, and the other half failed badly.
Things other than infant morality affect ALE as well -- the early 1860s and late 1910s saw drops in ALE, due to war and also, for the latter, the Spanish Flu pandemic. But the takeaway here is that “average life expectancy" does not refer to the most common age at which people died.
Source for statistics: Statistica.com