KCK April 13, 2020
I decided to institute Menu Mondays, where we explore an historic menu each week. Many of these will be coming from What's On the Menu?, a collection of old menus provided by the New York Public Library.

Since Titanic sank 108 years ago this week (this post is backdated this because it's time/day-of-the week sensitive and I was late), I thought we'd go with a menu from her only voyage.

On Pinterest I found this first-class luncheon menu dated April 10, 1912 -- the day Titanic set sail for her maiden (and final) voyage. I can imagine boarding the ship in my finery, perhaps with my lady's maid in tow carrying my luggage. settling into my cabin, and joining the Astors and the Countess of Rothes in the first class dining saloon to face some difficult decisions: 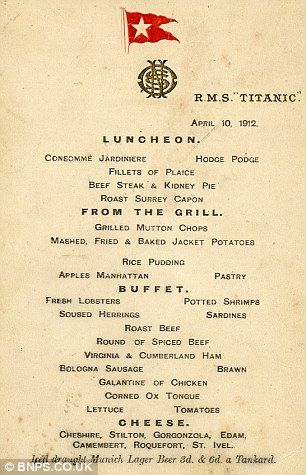 As meat-heavy as dinner would be, and as much as I find organ meat revolting, I probably would have gone with the Consommé Jardiniere , lobster, and tomatoes. Edwardians sure were not too much into vegetables, were they?

In a previous entry, I discuss a wonderful book, Last Dinner on the Titanic by Rick Archbold, that goes into the known menus and even gives recipes and tips on recreating the meals.