The correspondence directed me to the 2020 census website and gave me a code to input that is specific to my address; then it was time to fill out the questions. Having looked at countless old U.S. census records, I was really curious about the questions they would ask and how they would compare to those asked many decades ago. The form gave several reasons for cooperating with the census by filling it out and submitting it, such as emergency preparedness and knowing how many representatives are needed (which is based on population), one additional reason my history geek self would like to have seen was, “So that future genealogists and your descendants can have a record about you and what you were doing in 2020." I wonder if our ancestors ever thought, while the census takers sat in their parlors filling out the form, perhaps with little kids running around and distractions everywhere, that their descendants have access to them.

The first U.S. Federal Census was taken in 1790 -- the first year of the first decade that the United States of America officially existed. Unfortunately, this and the following four censuses only listed the head of the household by name; the other household members were numbered, according to sex and age. So, for example,  in the household of John Doe, you could only determine that there was one female between the ages of 30-40 and two males between the ages of 0-10. It wasn't until the 1850 U.S. Federal Census that all household members were listed by name.

The questions varied by each decade -- some were standard, such as name, age, sex, and race. The 1910 census has the added information of birth month and year, which is handy for family historians; the 1930 census for some weird reason asked if you owned a radio set, and the 1940 census (the most recent one publicly available until 2022) asked how many years of education you had. Additionally,  a couple of individuals on each page were asked supplemental questions, which are found at the bottom. 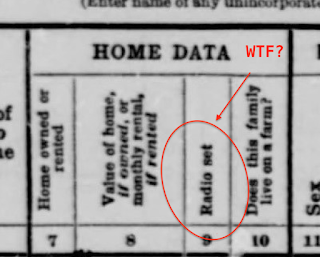 So for this census, I was surprised that there were no questions about occupation, education, or value of home -- just if you rented or owned or neither. I was surprised that, in the demographic questions about sex and race, they asked your “national background" (I think that's how it was phrased, anyway), and gave “e.g., Italian" as an example. Like many people, I'm several things, so I just put down “American" --  I was born here, after all, so that really is my national background.

U.S. Federal Census records are closed for 72 years -- that used to be the average lifespan here, so the idea was originally that people appearing in the census would be deceased by the time it was released publicly. But of course that's not really the case. According to census.gov,  “Individuals may request their own records (before they are publicly available) via the U.S. Census Bureau's Age Search service. This service provides individual information from censuses that are still protected by the 72-year rule, but only to the named person, his or her heirs, or legal representatives."