KCK November 07, 2015
My 2x great-grandmother Elizabeth Mace Bean Winslow (1846-1907) had two older brothers who both served the Union during the American Civil War: Thomas and Daniel. Thomas, whom I've written about before, perished.

But Daniel survived, and today it's his story I want to tell.

Daniel Webster Mace was born on 14 February 1845 in New Hampshire (probably Plaistow), the second surviving child of John Mace and Sophronia Bly. Around 1848, John Mace disappeared, and in the 1850 census, Sophronia and her children were living with her aunt and uncle (she is listed as a “pauper"). On 30 April 1859, she married Joseph Fellows.

So the Mace children grew up poor and fatherless; eldest son Thomas actually joined the Navy in 1857, at the tender age of 14! In the 1860 census, Thomas is a farmhand working for (living with?) a neighbor, and Daniel is a shoemaker's apprentice in Massachusetts.

I get the definite impression that, given the above information, things were not great at home.

Thomas almost immediately answered President Lincoln's call when war broke out in 1861, and was killed at Williamsburg on 5 May 1862. On 22 August of that year, just a few months after his brother's death, Daniel enlisted in the 50th Massachusetts infantry; I find this so brave and touching.

He enlisted again in February of 1864, this time in the 59th Massachusetts infantry, company E. During the siege of Petersburg, on 7 June 1864, Daniel was wounded in the left leg and captured- and he would spend the next six horrible months at Camp Sumter in Andersonville, Georgia. He survived, and was exchanged on 25 November.

On 18 March 1865, Daniel married Mirinda Wilkinson. It would be interesting to know if they had been engaged during the war, or if they met at some point after his release from the prison camp and just had a whirlwind courtship. Daniel was discharged from the Army for disability two months after the wedding.

Daniel and Mirinda had a son, William, born in 1867, but the marriage was apparently a troubled one; Mirinda divorced Daniel in 1880, and the records give her charge against him as  “habitual drunkenness."

All I can say here is, if I had spend almost a half a year at Andersonville (the conditions of which were comparable to those of Nazi death camps), then I'd probably drink too. There was no counseling, no VA, no psychological support for soldiers at all at that time. 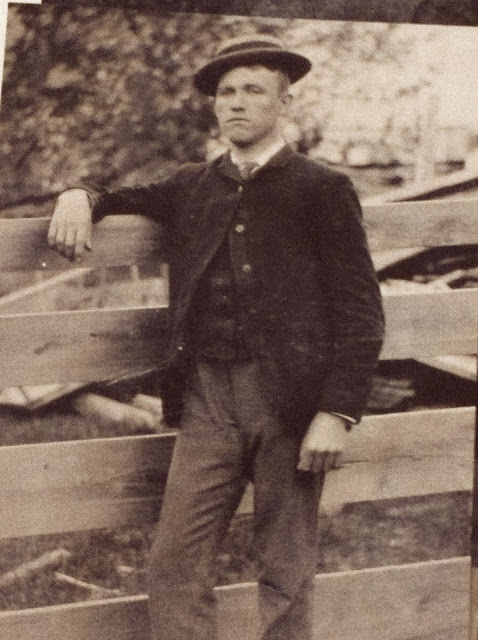 In the 1900 census, Daniel is living with his now-widowed mother Sophronia, his sister Elizabeth, Elizabeth's husband James, and their daughter Bessie (my great-grandmother). In the censuses of 1910 and 1920, he's living alone and is a laborer.

Daniel was apparently very close to his half-sister Laura Fellows Noyes, Sophronia's daughter by Joseph Fellows. She, too, was a divorcee, as well as a medical doctor. “Uncle Dan" would help her with her three girls-- two of whom would also become doctors.

When Daniel died on 1 June 1924, Laura Noyes was his attending physician. Interestingly, he left only 1 dollar each to his son and to sisters Lizzie and Sarah Ellen. The rest of his estate went to Laura and her heirs. Granted, his “estate" probably wasn't very much, but my understanding is that you leave $1 to someone as basically a way of saying, “No, I didn't overlook you-- I really meant to give you the shaft."

In Daniel's will, he also requests that his grave be given a “suitable monument" reading “Daniel W. Mace, Company E, 59th Regiment Mass. Volunteers, War of 1861-1865", along with his age and date of death.

Thank you, Uncle Dan, for your service.