KCK August 08, 2015
My fourth cousin Jon recently moved to Rockingham, New Hampshire. He took a trip to the New Hampshire Archives to see if he could find any information on our common 3x great-uncle Thomas B. Mace. He served in the 2nd New Hampshire Infantry in Company K, and was killed at Battle of Williamsburg on 5 May 1862 at the tender age of 19.

Jon found Thomas's enlistment papers, and was kind enough to send them to me and give me permission to share them here. 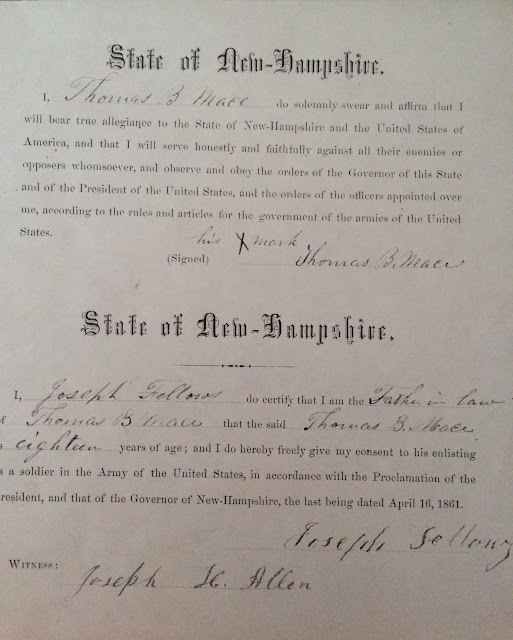 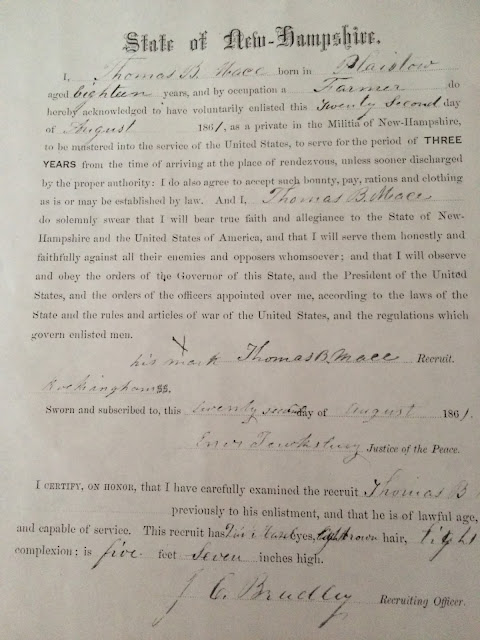 The papers provide some interesting pieces of information:

The papers confirm that Thomas joined the army voluntarily, although he apparently needed the permission of his stepfather, Joseph Fellows; Fellows had been married to my 3x-great-grandmother Sophronia (nee Bly) for about two years.

Joseph Fellows calls himself Thomas's “father-in-law", not “stepfather." Today, “father-in-law" strictly means father of one's spouse, but evidently it had a looser meaning back then, literally “one's lawful father", which could include the children of one's spouse. Following this, a “sister-in-law" could be a stepsister, and a “brother-in-law" a stepbrother. This is something I didn't realize-- and something to keep in mind when we run across these terms on probate records, wills, or censuses.

A physical description of Thomas is also included-- according to this, he was 5'7", with dark hazel eyes, light brown hair, and a light complexion.

Lastly, and rather surprisingly, Thomas was illiterate; he made an x instead of signing his name. I would have expected an American man born in the 1840's to have had some schooling, at least enough to read and write some. I can only figure that he couldn't go to school because he was needed at home. Sophronia's first husband (and Thomas's father) John Mace disappeared in the late 1840s, when he was just a little boy. Sophronia didn't marry again until 1859, to Joseph Fellows. Sophronia herself was illiterate, so I suppose there was no one to teach Thomas.

It's sad to think that only eight months after he made his mark, agreeing to fight for the Union, he would die doing so, at an age where today he would be starting college.

Thanks to my cousin Jon, who is always so good about staying in touch and sharing information.