KCK June 13, 2015
Last weekend, within a timeframe of 48 hours, I discovered where my 3rd great-grandparents Joshua Palmer and Arvilla Bailey Palmer were buried, when Arvilla died, and got photos of their stone uploaded to Find-A-Grave.

I had been unable to find death records for Joshua and Arvilla, and the state did not have them either. So I emailed the Concord Historical Society* and my email was forwarded to the person who is in charge of cemeteries in Concord. Last Friday afternoon, this person got back to me with the name of the cemetery (Blossom Hill), and even included burial records and map showing exactly where the burials are located. 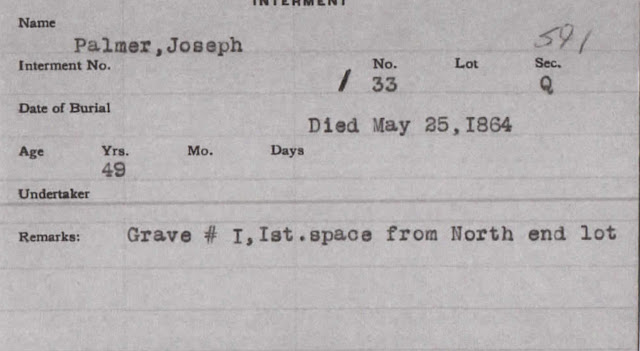 They are buried with their daughter Flora A. Palmer Follansbee, sister of my 2nd great-grandfather George Bailey Palmer, and her husband James W. Follansbee. He was apparently a Civil War veteran who had seen a lot of action, and was actually present at Appomattox when Lee surrendered to Grant.


Joshua's name is incorrectly given as Joseph
Saturday morning, I created memorials for Joshua and Arvilla, and that afternoon they were claimed. The following afternoon (Sunday), the volunteer posted the photo of their stone.

Thanks to all who helped make this possible!


*No one responded to the couple of emails that I had sent, so I sent an actual letter. Yes, though the mail. I've done this before when email and phone calls haven't been returned, and I in my experience this succeeds in getting a response. About a week after I sent the letter, I got the email.