KCK May 30, 2015
Recently I wrote about discovering the birth record for my great-grandmother Mary Elizabeth Fitzgerald Ryan (1879-1954). Through it, I was able to find quite a bit of information on her parents, Thomas Fitzgerald and Rose Connelly.

Here's what I found this past week:

Great-grandmother Mary's father Thomas Fitzgerald was born in July of 1853 in Ireland to Patrick and Mary Fitzgerald. He immigrated in 1860, and on 18 August 1878, he married Rose Connelly in Newton, Massachusetts. She was born about 1847, also in Ireland, to Thomas and Bridget Connelly. 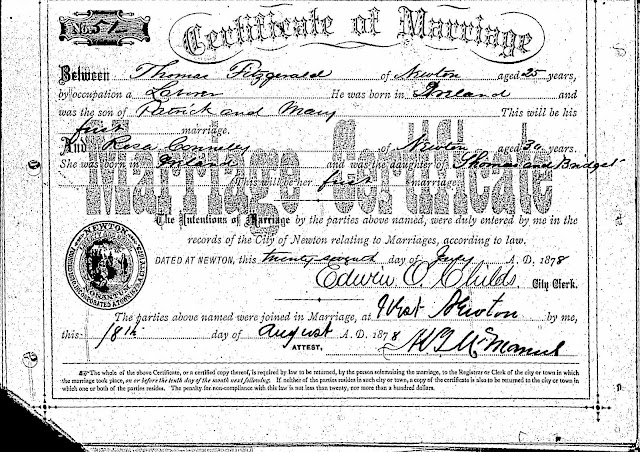 I found records for four children born to Thomas and Rose. My great-grandmother Mary Elizabeth was the eldest, born on 22 May 1879. She was followed by Thomas, born 9 January 1881; then Eddie, born 2 April 1882; lastly, Walter was born on 7 March 1885. All were born in Needham, Massachusetts except for Walter, whose birthplace was given as Wellesley.

Rose died just over one month after Walter's birth, on 10 April 1885, of typhoid pneumonia. Whether the birth contributed to her contracting the illness, I don't know. She was only about 37 years old.

I figured that Thomas, who was only about 32 at this time and had several small children, would probably remarry. Lo and behold, he did: he married Louisa Priest, a widow whose maiden name was either Deacon or Deaking, on 5 August 1891. She was born in England. It surprised me that he waited so long to remarry when he had small children who needed taking care of, and that when he did, it was to an Englishwoman.

In the 1900 census, Thomas and Louisa were living in Boston with William P. Fitzgerald, aged 22, whose relationship to Thomas (the head of the household) is listed as "son." Since Thomas and Rose had no recorded son by this name, and since he was too old to have been a son of Thomas and Louisa, he was almost certainly Louisa's son by her previous marriage-- i.e., Thomas's stepson.

Where were his children? They weren't living with him, none had died (at least not that I can find, and I know for sure that Mary was alive), but I can't find any census entries that fit any of them. Walter, the youngest, would have only been about 15 years old. Could they have been in Ireland with relatives?

Thomas is buried at New Calvary in Mattapan. I reached out to the cemetery and found out his plot number (278 or 279 of section 8). I've requested a photo of Thomas's resting place on Find A Grave.

The plot's owner is listed as my great-grandmother Mary E. (Fitzgerald) Ryan. Strangely, neither Rose nor Louisa is buried there. Louisa's death certificate gives her burial place as Cedar Grove Cemetery; Rose's death record, listed in a register, does not give her burial place.

As is so often the case with genealogical discoveries, more questions arise...