KCK May 24, 2014
Last week, a distant cousin who found me on Find-A-Grave, and who found this blog through it, contacted me and introduced herself: she's the great-granddaughter of my 2nd great-grandmother's half-sister. 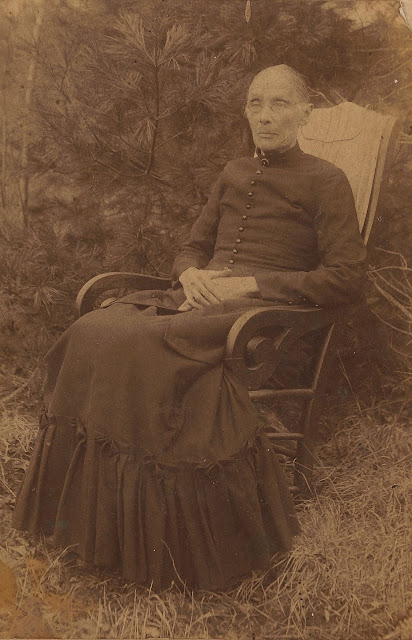 She doesn't look anything like I pictured her; I had frankly expected her to more resemble my great-grandmother Bessie, who looked as though she could fight Chuck Norris and win. This lady may be older and careworn, but she has a gentleness to her features.

Sophronia's eldest son was Thomas B. MACE, whom I've written about before. He was born about 1843, and after serving as a Navy sailor at the age of 14, enlisted in the 2nd New Hampshire, Company K when the Civil War broke out. He fell at Williamsburg on 5 May 1862. Sophronia filed for his pension in August of 1869, right after the death of her second husband, Joseph Fellows.

Sophronia's only child by Joseph Fellows was Dr. Laura Etta Fellows Noyes, who was the great-grandmother of this cousin who contacted me. In 1900, Laura was attending the College of Physicians and Surgeons in Boston, and in 1902 she set up practice in Rumford, Maine. Two of her three daughters became doctors as well. Pretty remarkable for the early 20th century, I'd say.

So a big thank you to my cousin for sharing this photo and info with me. I'd been wishing to find a picture of Sophronia for years, and now I can finally put a face with the name. Honestly, I don't know how people did genealogy before the internet...